HDL code to realize all the logic gates

Prerequisites: Study of the functionality of logic gates.

Objective: To design all types the logic gates using Verilog HDL Programming and verify their simulation and synthesis reports.

Software and Hardware: Xilinx ISE 9.2i and FPGA Spartan-3E.

A logic gate performs a logical operation on one or more logic inputs and produces a single logic output. The logic is normally performed as Boolean logic and is most commonly found in digital circuits.

The different types of logic  gates are:

The AND gate is an electronic circuit that gives a high output (1) only if all its inputs are high. A dot (.) is used to show the AND operation i.e. A.B. Bear in mind that this dot is sometimes omitted i.e. AB

The OR gate is an electronic circuit that gives a high output (1) if one or more of its inputs are high.  A plus (+) is used to show the OR operation.

The NOT gate is an electronic circuit that produces an inverted version of the input at its output. It is also known as an inverter. If the input variable is A, the inverted output is known as NOT A. This is also shown as A', or A with a bar over the top, as shown at the outputs. The diagrams below show two ways that the NAND logic gate can be configured to produce a NOT gate. It can also be done using NOR logic gates in the same way.

This is a NOT-AND gate which is equal to an AND gate followed by a NOT gate. The outputs of all NAND gates are high if any of the inputs are low. The symbol is an AND gate with a small circle on the output. The small circle represents inversion.

This is a NOT-OR gate which is equal to an OR gate followed by a NOT gate. The outputs of all NOR gates are low if any of the inputs are high.

The 'Exclusive-OR' gate is a circuit which will give a high output if either, but not both, of its two inputs are high.  An encircled plus sign () is used to show the EOR operation.

The 'Exclusive-NOR' gate circuit does the opposite to the EOR gate. It will give a low output if either, but not both, of its two inputs are high. The symbol is an EXOR gate with a small circle on the output. The small circle represents inversion. 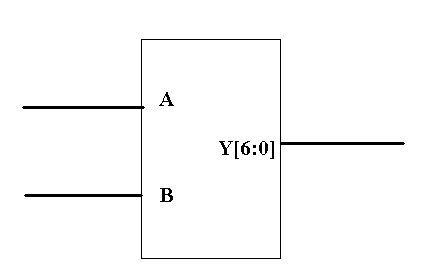 HDL code-Design of 8-to-3 Encoder (Without Priority)

Design of 2-to-4 decoder